ORT Webinar: (Neural) Networking with Cyclica on May 18 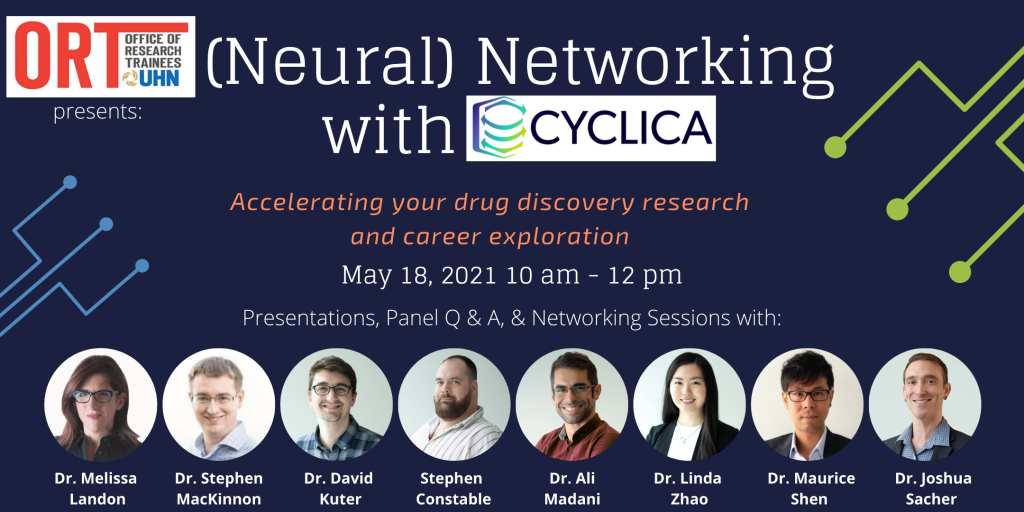 ORT at UHN invites you to a  webinar on Tuesday May 18th for (Neural) Networking with Cyclica. Join us to explore the research, careers, and opportunities at this exciting Toronto-based biotech company!

Learn about Cyclica and their AI-augmented platform that accelerates drug discovery, including hearing about opportunities with Cyclica’s Academic Partnerships Program or for Mitacs internships.

Meet 8 Cyclica team members from various groups including the Chief Strategy Officer, VP of Research and Development, and Directors of Technology and Scientific Computing. Hear about their career paths, learn from their experiences, ask questions and network during our breakout sessions!

Dr. Stephen MacKinnon, VP of Research and Development: Cyclica is a Toronto-based, globally recognized biotechnology company developing predictive technologies to reshape the drug discovery process. Stephen designed and led the development of Cyclica’s first market technology, LigandExpress®, which provides a panoramic prediction of a drug’s unintended effects on biological systems at the molecular level. He now oversees the research and development at Cyclica for new computational technologies, from ideation to market. He completed a B.Sc. in Computational Sciences at the University of Waterloo and PhD studying Computational Biochemistry at the University of Toronto.

Dr. David Kuter, Director of Scientific Computing (he/him): David is a Bioinorganic Chemist by training and received is PhD from the University of Cape Town in South Africa studying antimalarial modes of action in 2014. Following computationally-oriented postdoctoral fellowships at Stellenbosch University (South Africa) and McGill University (Canada), he accepted a Computational Scientist position at Cyclica in 2018. He is currently the Director of Scientific Computing and leads a team of software developers and computational scientists tasked with developing and maintaining Cyclica’s suite of drug-discovery software products.

Steven Constable, Director of Technology (he/him): Steve leads Cyclica in some of the important but often under-emphasized aspects of a (bio)tech company: software deployment, infrastructure as code, system administration, internal tooling, and software development best practices. He has a BSc. in Computational Science/Biochemistry from U of Waterloo and an MSc. in Theoretical Chemistry from the same. He has previously worked as a Systems and Support Specialist with a chemistry research group affiliated with the Canadian Space Agency.

Dr. Linda Zhao, Strategic Partnerships Manager (she/her): Linda is a scientist-turned-business professional with a background in immunology. She establishes collaborations and partnerships with biotech and academic groups globally. Linda received both her BSc and PhD from the University of Toronto.

Dr. Joshua Sacher, Applied Scientist (he/him): Joshua received his BS in Biochemistry from the University of Delaware and his PhD in Synthetic Organic Chemistry from Penn State University with Steven Weinreb. After completing a Medicinal Chemistry post doc with Peter Wipf at the University of Pittsburgh, Joshua joined the Broad Institute of MIT and Harvard as a Medicinal Chemist. During Joshua’s 6 years at Broad, he began exploring the fields of Computational Chemistry and Cheminformatics, eventually becoming a full-time Cheminformatician. In his current role as an Applied Scientist, Joshua combines all of these skills by applying Cyclica’s drug discovery technology to internal, academic, and commercial projects. He is one of Cyclica’s few permanently remote employees and resides in the United States.

Dr. Shelley Deeke, Applied Scientist (she/her): As an Applied Scientist, Shelley works closely with Cyclica’s partners across biotech, Pharma, and research institutions to address their research objectives and accelerate their efforts to uncover new treatments with Cyclica’s drug discovery platform. In her role she also uses her scientific expertise to conduct internal validation studies to ensure the generalizability and robustness of new experimental machine learning prototypes. Shelley received her Ph.D. in Biochemistry from the University of Ottawa for her work in applying proteomics to identify biomarkers for pediatric inflammatory bowel disease.